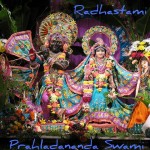 Lecture on the Srimad Bhagavatam Canto 1 Chapter 3 verse 1 titled “Plastic Chapati Cook” given in Timisoara – Romania on the morning of June 16, 2011. The subject of the lecture is related to Lord Krishna’s incarnations, specifically the Purusa Avataras – (external pastimes)

Suta said: In the beginning of the creation, the Lord first expanded Himself in the universal form of the purusha incarnation and manifested all the ingredients for the material creation. And thus at first there was the creation of the sixteen principles of material action. This was for the purpose of creating the material universe.

The Bhagavad-gita states that the Personality of Godhead Sri Krishna maintains these material universes by extending His plenary expansions. So thispurusha form is the confirmation of the same principle. The original Personality of Godhead Vasudeva, or Lord Krishna, who is famous as the son of KingVasudeva or King Nanda, is full with all opulences, all potencies, all fame, all beauty, all knowledge and all renunciation. Part of His opulences are manifested as impersonal Brahman, and part of His opulences are manifested as Paramatma. This purusha feature of the same Personality of Godhead Sri Krishna is the original Paramatma manifestation of the Lord. There are three purusha features in the material creation, and this form, who is known as the KaranodakasayiVishnu, is the first of the three. The others are known as the Garbhodakasayi Vishnu and the Kshirodakasayi Vishnu, which we shall know one after another. The innumerable universes are generated from the skin holes of this Karanodakasayi Vishnu, and in each one of the universes the Lord enters as GarbhodakasayiVishnu.

In the Bhagavad-gita it is also mentioned that the material world is created at certain intervals and then again destroyed. This creation and destruction is done by the supreme will because of the conditioned souls, or the nitya–baddha living beings. The nitya–baddha, or the eternally conditioned souls, have the sense of individuality or ahankara, which dictates them sense enjoyment, which they are unable to have constitutionally. The Lord is the only enjoyer, and all others are enjoyed. The living beings are predominated enjoyers. But the eternally conditioned souls, forgetful of this constitutional position, have strong aspirations to enjoy. The chance to enjoy matter is given to the conditioned souls in the material world, and side by side they are given the chance to understand their real constitutional position. Those fortunate living entities who catch the truth and surrender unto the lotus feet of Vasudeva after many, many births in the material world join the eternally liberated souls and thus are allowed to enter into the kingdom of Godhead. After this, such fortunate living entities need not come again within the occasional material creation. But those who cannot catch the constitutional truth are again merged into the mahat–tattva at the time of the annihilation of the material creation. When the creation is again set up, this mahat–tattva is again let loose. This mahat–tattva contains all the ingredients of the material manifestations, including the conditioned souls. Primarily this mahat–tattva is divided into sixteen parts, namely the five gross material elements and the eleven working instruments or senses. It is like the cloud in the clear sky. In the spiritual sky, the effulgence of Brahman is spread all around, and the whole system is dazzling in spiritual light. The mahat–tattva is assembled in some corner of the vast, unlimited spiritual sky, and the part which is thus covered by the mahat–tattva is called the material sky. This part of the spiritual sky, called the mahat–tattva, is only an insignificant portion of the whole spiritual sky, and within this mahat–tattva there are innumerable universes. All these universes are collectively produced by the Karanodakasayi Vishnu, called also the Maha–Vishnu, who simply throws His glance to impregnate the material sky.