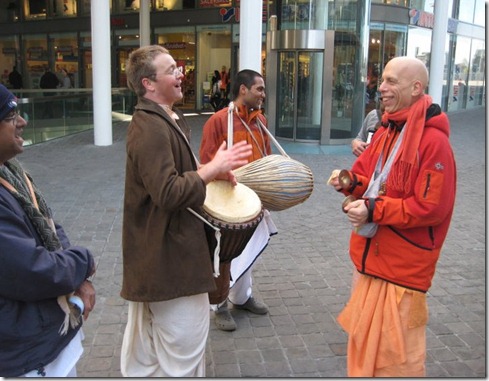 We decided to track down the harinam party, which proved more difficult than we first thought.  They had strayed off into the street malls of Maastricht, nowhere to be seen or heard.  There was no speaker system so they were a little more faint then the usual rip-roaring street kirtanas.  Eventually we found them, also finding an empty book box (the distributors had claimed all the books!).  The devotees were all still super enthusiastic in their congregational kirtana.

HH Prahladananda Swami continued to maintain the harinam at the main mall until we all closed in.

taken from Gaura Purnima and Sankirtana Saturday Posted: April 18, 2011 by maddmonk in Life In The Castle